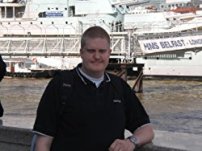 Today’s author you need to know is Brent A. Harris.

Brent is an amazing author of science fiction and alternate

history. He’s extremely talented and well worth a chance. I’ve read several of his short stories through Inklings Press and his novel A Time of Need (you can see my video review of it here). I’ve been impressed with everything I’ve read so far.

I don’t recall when or exactly how I met Brent, but I do know it was over Twitter. Most likely it was through Inklings Press. He’s been a big advocate of my work and a great sounding board when I’ve asked. I can’t say enough positive things about Brent as a fellow author and friend.

From his Amazon page:

Brent A Harris is a Sidewise Award nominated author of alternate history. He also writes science fiction, horror, and fantasy. Previously published works can be found through Insomnia Publishing, Rivenstone Press, Rhetoric Askew, and Inklings Press, the latter having published his short story, Twilight of the Mesozoic Moon, which reaped the Sidewise Award nomination.

He is the author of A Time of Need, an alternate history of the American Revolution, which sees a world where George Washington fights alongside the British against American forces marshaled under a power-hungry Benedict Arnold.

Brent resides in Southern California, where he’s become convinced that Joshua trees are in fact, real trees. When not writing, he focuses on his family, shuttling children around as a stay-at-home dad.

Check out all his short stories and his novel A Time of Need on Amazon and give this talented author a try.

Come back tomorrow for another author you need to know!

2 thoughts on “Jason’s Authors You Need to Know – Brent A. Harris”